Few weeks ago I attended a session on the new API specification in oVirt. While the motivation was well explained and the overall design of the solution made a lot of sense, the presented language made me wonder whether it is the best language for the problem at hand. In this post I argue we can achieve a better language for the API specification in oVirt by using an external DSL rather than an internal DSL.

A domain specific language (DSL) is a programming language that is tailored to a particular problem domain. Unlike general purpose languages (such as Java, C, C#), DSLs do not aim at being turing-complete. They generally provide syntax that is more declarative, concise and restrictive at the expense of reusability.

The concept of DSLs is not new. Most probably, if you are a developer you have already programmed with a DSL. Some notable examples of DSLs are: HTML for creating webpages, SQL for interaction with databases and MATLAB for matrix programming.

Martin Fowler distinguishes between two types of DSLs: internal and external. An internal DSL is a particular form of API in a general purpose host language (e.g., fluent API), while an external DSL is parsed independently and is not a part of a host language.

Fowler noted language workbenches (LWs) as a possible killer-app for DSLs. These are tools that address the Achilles’ heel of external DSLs by facilitating their creation and use.

Today, LWs are typically based on mainstream IDEs and provide one with tool support for the grammar definition of the DSL using some grammar definition format (from which the parser and editing tools are generated) and tool support for the definition of the semantics of the DSL using some code transformation format (so DSL code could be transformed into code in a general purpose language in order to leverage the compilation tools of the latter).

Some notable production-ready language workbenches that are available today are: Xtext and Spoofax that are based on Eclipse, and MPS that is based on IntelliJ. I find Xtext to be the most practical LW nowadays among the ones mentioned above thanks to its ability to generate plugins for programming with the DSL in both Eclipse and IntelliJ, the integration one can achieve with Java and the fact that it does not make use of projectional editing.

A problem we were trying to solve in oVirt 4.0 was twofold:

Previously, the specification of the REST-API interface was integrated in the oVirt-engine project (figure 1). That lead to two issues. First, SDKs were depended on a fat artifact that contained more than just the specification. Second, we could publish this artifact only when a new version of oVirt-engine was released.

While it was possible to document the specification on top of the Java implementation of the REST-API interface using Javadoc, many parts were missing or not up-to-date.

Current Solution based on Internal DSL

Second, a new language was introduced to express the API specification in order to ease its documentation. This language is an internal DSL with Java as the host language.

In this language data types are represented by Java interfaces and documentation is provided in the form of Javadoc comment. For example, the Vm.java file contains the specification of the Vm entity, which looks like this:

Services are represented in a similar way:

More about the current language can be found here.

The solution proposed in this post leaves the first part, the architectural design change, as is. That is, the API specification stays as a separate project. The difference is in the second part, namely the language introduced for the API specification, where an external DSL is used rather than an internal DSL.

An example for how to define the VM entity mentioned before with an external DSL:

These code quotes could make you underestimate the effectiveness of programming with such a language due to the lack of support by Github’s markdown format for the presented language. IDE plugins, in contrast, provide the developer with the standard editing tools that are available today like auto-completion and text-highlighting. The next video demonstrates how a part of the VmService shown above was written in Eclipse: 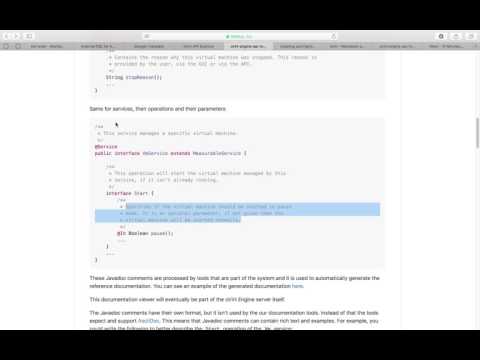 The language definition can be found here. The language is defined in the grammar definition format provided by Xtext. For more details about this format and Xtext in general see the documentation on eclipse.org.

As a proof of concept, the Vm entity and VmService were transformed into their implementation in the internal DSL shown before. This transformation that was written in Xtend, a programming language provided by Xtext, can be found here. Note that in production it would be better to transform them directly into the target representation of the specification without the transformation into the internal DSL. The full definition of Vm and VmService can be found here and here (and the generated code here and here).

Why is External DSL Better

So what is the big deal between using the internal DSL vs. using the external DSL you may ask. Their syntax is quite similar and the latter does not provide one with the ability to express something one cannot express with the former. I will point out the benefits of using an external DSL by addressing things that came up in the session I mentioned at the beginning and from my own experience with working with both languages.

The argument for basing the presented language on Java (which makes it an internal DSL) was to make it possible to leverage Java tools. But as we have seen before, the same capabilities can also be achieved for an external DSL by using a language workbench.

In the mentioned session one asked whether the language itself or the tools developed for it (for its transformation I believe) can be reused by other projects. The answer was positive. Questions about reuse are often raised in order to find a way to reduce the amortized development cost. However, when using a proper language workbench, one uses third-party tools for the language definition and its transformation that significantly simplify the language development, making it (typically) cost-effective even for one-time use. By taking reusability out of the equation, the language can be kept minimal and optimal for the particular instance of the problem at hand.

The presenter showed an example for adding a color to the Vm entity. One guy asked if we can use the type byte for the RGB values of the color instead of an int. The answer was negative. This is an example of a downside of basing the language on Java - one may try to use any type provided by Java, even unexpected ones. In contrast, the external DSL provides only the supported types. Note: yet, one can easily define that a particular field can be of any Java type, if needed.

That example exposed another downside of the internal DSL. The presenter typed most of the definition of the color without specifying a comment for that field. Then he asked “is something missing?” and although that question seemed suspicious, most of the crowd answered that nothing is missing. Documentation in the form of Javadoc is optional and is easy to forget. The fact that documentation in the internal DSL is provided as Javadoc could make one reach the code review phase without the required documentation and the reviewer can easily miss it. In the external DSL, however, documentation is part of the language and thus lack of documentation will produce an error by the IDE (without any checkstyle or other plugin), making it impossible to forget to document.

Another question was: why should we use the @Type and @Service annotations while we can retrieve that information from the package the file is located in (either types or services)? I think this question can be generalized to: how can we reduce the boilerplate code? Looking at code written in the internal DSL, we see a redundant syntax that is repeated again and again: the visibility of the types and services, the interface keyword near every action in a service, empty parenthesis near every property of a data type and so on. In contrast, we see much less boilerplate code in one written in the external DSL.

And lastly, besides being optional, the fact that Javadoc comments have no clear structure makes it difficult to understand the expected format of the documentation. For example, one is expected to write the date and status of a comment he adds/modifies. It is easy to forget to write the date and unless the reviewer catches it, documentation can be merged without specifying its date or when it is typed incorrectly (having @data instead of @date for instance). As for the status, not only that it is easy to forget to specify it, it is unclear what are its allowed values since it is a free text. Unlike the internal DSL, the external DSL provides a clear structure for documentation as part of the language, enforcing developers to provide all the required values and reduce the chance for issues that are caused by typos. An example for a structured documentation in the external DSL:

One downside of using an external DSL is that it means to require contributors to use an IDE plugin for programming with the external DSL. On the other hand, language workbenches like Xtext are able to produce plugins for mainstream IDEs and mechanisms like Eclipse’s update-site can simplify the installation of such plugins.

The advanced language workbenches that are available today greatly increase the attractiveness of external DSLs. One is able to program with languages that typically better fit for the problems at hand compared to general purpose languages and internal DSLs without the high effort that was traditionally needed in order to create them and program with them due to lack of tools.

This post presents an external DSL for the API specification of oVirt that was partially implemented using the Xtext language workbench. Hopefully this post would interest people that work on oVirt’s API specification and push them toward giving a chance for such a language instead of the internal DSL that was introduced in oVirt 4.0.